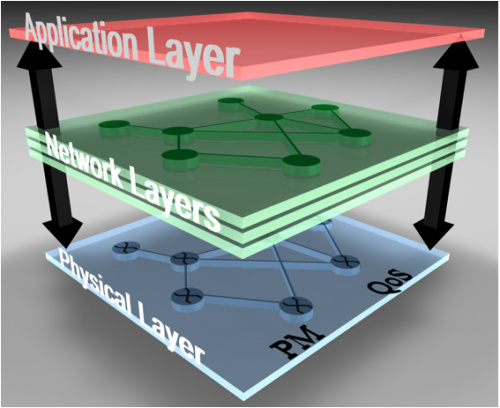 During the last decade, it has been widely recognized that an independent optimization of the different OSI layers in a communication system is a limiting design factor. Instead, a cross-layer design is necessary. In this sense, network utility maximization (NUM) problem formulations provide an important approach to conduct network resource allocation and to view layering as optimization decomposition.

In the previous existing literature, distributed implementations were typically achieved by means of the so-called dual decomposition technique. However, the span of decomposition possibilities includes many other elements that had not been fully exploited, such as the use of the primal decomposition technique, the versatile introduction of auxiliary variables, and the potential of multilevel decompositions. We have developed a systematic framework to exploit alternative decomposition structures as a way to obtain different distributed algorithms, each with a different tradeoff among convergence speed, message passing amount and asymmetry, and distributed computation architecture. Some illustrative applications include resource-constrained and direct-control rate allocation, and rate allocation among QoS classes with multipath routing.